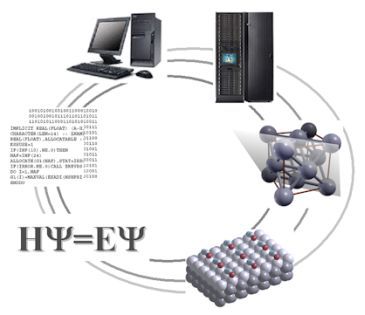 The activity of the group is divided in two main research topics: development and distribution of quantum chemistry computer codes, and the quantum-mechanical simulation of the properties of crystalline materials.

The TEO research group has a long tradition in the implementation ofcomputer software for the ab initio quantum-mechanical study of the physico-chemical and structural properties of condensed matter.The general philosophy is to make the software developed available to the scientific community by periodically publishing well-tested and documented versions of the codes. 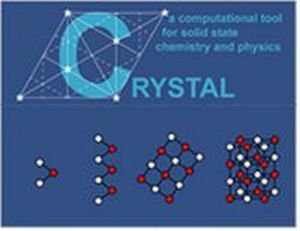 The CRYSTAL ab initio program computes the electronic structure and properties of crystalline solids (www.crystal.unito.it). It uses a basis set of atom-centred Gaussian functions, and is constituted by more than 300000 code lines in Fortran language.  Since 1998 CRYSTAL is distributed publicly under licence, and is used today by more than 300 research groups all over the world, mainly in the academy but also in industrial laboratories. The main application fields are: Materials Science, Geochemistry, Surface Science, Nanotechnlogies and Pharmaceutics. The CRYSTAL project is a long-term project carried on since more than 40 years by the TEO group.

The CRYSTAL14 version of the program is currently distributed. The program can run on a wide variety of architectures,  from notebooks to supercomputers. The performance of the massively parallel version of the code has been documented on several architectures. One calculation (Hartree-Fock energy plus gradients) of a crystalline system with 2316 atoms and 31024 basis functions in the unit cell takes 1.5 hours to complete on a IBM SP6 system with 2048 cores.

CRYSCOR is a new code, which calculates the correlation correction to HF wave-function and energy for periodic systems, starting from the HF results obtained by CRYSTAL, and using local-correlation techniques as developed by Meyer, Pulay, Werner, Schuetz et al. for molecules.

MOLDRAW is a graphical program useful for the 3D visualization of molecules and solids on PC or Mac (www.moldraw.unito.it). It counts more than 6000 downloads from laboratories all over the world. The program is interfaced to CRYSTAL and many other quantum chemistry codes, and can handle input/output files.

in silico characterization of materials. 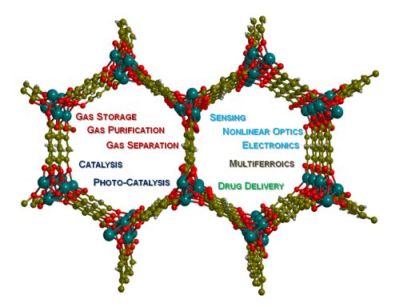 In addition to the software development activity, the TEO group is involved in the application of the codes — mainly the ones developed in the group, but not only — to the computational study of crystalline solids and the simulation of their properties.

This activity branches in several directions, hereafter listed according to the main classes of materials under study:

In this research activity materials derived from graphene and carbon nanotubes (CNNTs) are studied. Their structural, electronic, dielectric and vibrational properties are simulated at an ab initio level using hybrid functionals. Novel graphene phases are proposed, that feature several types of defects (vacancies, heteroatomic substitutions). Finally, the interaction of Graphene with different substrates and/or gas-phase molecules is investigated.

Materials of wide mineralogical interest (e.g. garnets and olivines) are widely studied in our group. Particularly, the simulation of infrared and Raman spectra of such systems permitted to shed light on several controversies in the interpretation of experimental spectra.

Metal-Organic Frameworks (MOFs) are a new class of materials that in the last decade has seen a paramount growth and are expected to play a huge impact in the development of next-generation technologies. They consist of inorganic nodes (i.e. a metal ion or a cluster) connected through organic ligands that act as linkers to form a porous three-dimensional framework. The combination of different nodes and linkers makes MOFs very versatile materials with interesting and promising applications in many fields, including: gas adsorption, catalysis and photo-catalysis, drug delivery, sensing, nonlinear optics. In the last years, a throughout characterization of the structural, electronic, vibrational, elastic properties of different families of MOFs has been carried out, along with the investigation of their adsorption capacity. In collaboration with experimentalists, we studied the adsorption capabilities of MOF-74(Mg,Ni,Zn) and Ni-BTP towards small molecules like CO, CO2, N2, .. We are currently investigating the adsorption properties of the so-called giant MOFs (also know as mesoporous MOFs) in particular of MIL-100. Along with small molecules, selected drugs will be considered to better understand the properties of MIL-100 as a nano carrier material for drug delivery. This latter work has been recently funded with a PRACE grant. Defects in the zirconium MOF UiO-66 are also under investigation to shed some light on the synthesis of UiO-66 and its stability.

We use recently developed DFT functionals, including doubly hybrid functionals, as well as the periodic local MP2 method implemented in CRYSCOR to study properties of molecular crystals, like their cohesive energy and the relative stability of their polymorphs.

The aim is: (i) to understand physico-chemical phenomena taking place at the surface of biomaterials like hydroxiapatite and silica-based materials; (ii) characterization of drug/silica excipients and (iii) the study of interstellar and abiotic chemistry.

Hybrid functionals with dispersive corrections to the energy (B3LYP-D) are used as an accurate tool for the study of solids and surfaces. Large-scale calculations allowed to elucidate the role of adsorption forces in the stabilization of different conformations of oligopeptides adsorbed on the most common faces of hydroxiapatite. The same approach was applied to the study of interactions of Ibuprofene in MCM41 and Silica.

Light-weight metal boron hydrides (MBH) (e.g. Mg, Ca, ..) are under investigation as potential hydrogen storage materials. The research activity is focused on the ab-initio prediction of the decomposition energy of the MBHs to tune their thermodynamic stability with respect to the release of molecular hydrogen in order to reach the target value of about 30 kJ/mol per H2 molecule. To do that, mixed metal boron hydrides have been studied by exploring Mg/Zn solid solutions. Nanostructuring and confinement of MBH in carbon scaffolds have also been investigated through model systems such as small clusters of MBH adsorbed on graphene. In addition, the role of additives (e.g. transition metals) on the stability of MBH is under investigation for both bulk and surfaces to understand how additives can modify the decomposition pathways. Fundings are acknowledged from EC FP-7.

Epitaxial overlayers of MgO or NiO on Ag(001) have been characterized by using slab models. Attention is being given to the early (sub-monolayer) stages of the film growth.

After designing pseudo-disordered models of ordinary ice and characterizing in this way its bulk and surface properties, current research activity is devoted to ice vibrational properties and to ice clathrates.